Here in NY it's pretty hot and muggy. That doesn't stop me from turning on the oven and trying to recreate one of my favorite cookies. These cookies come from California, from the cookie department. You can read the story online, but basically, these cookies are heaven with a purpose.

Of course, I can only eat the "smart" cookie, which is shown here: 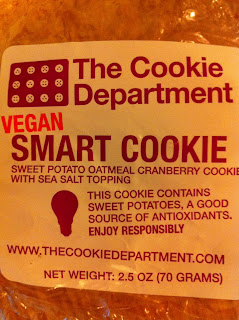 I wanted to re-create this cookie without any sugar, because then I can eat a ton of it and not feel bad. Here's my recipe: 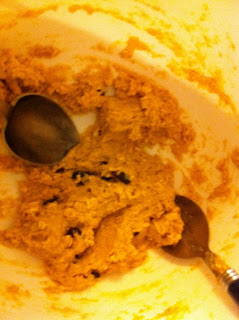 Method:
-preheat oven to 375 F and set out baking pan with parchment paper
-mix together wet ingredients
-stir in dry ingredients
-fold in cranberry mix
-spoon cookies out onto baking pan
-sprinkle sea salt over the top
-bake for 10-15 minutes
A little disclaimer, I didn't have regular cranberry mix, so I used this: 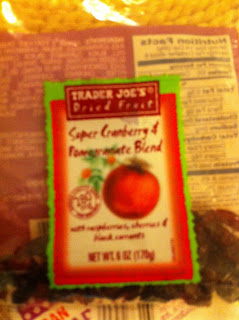 It turned out ok though! Also, I know the original wrapper says sweet potato, but pumpkin puree is a lot easier to find here. 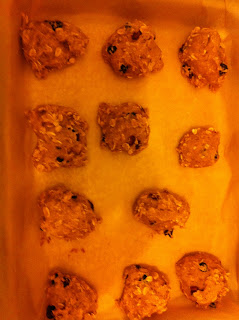 These cookies are ok, not as good as The Cookie Departments, but a ton healthier. There is no sugar, and is full of whole grains. They are almost breakfast cookies. I like them, but I miss the Berkeley version. My sister sent me four of these cookies... so once I ran out I wanted to make my own.
A few days ago I was really craving pizza, but didn't have the time to make any. I walked around the block to a vegan pizza place, and got this baby: 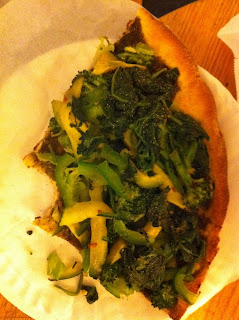 Ignore the big bite taken out of it... It's a "green" pizza which means broccoli, zucchini, spinach, and green bell peppers atop pesto and a spelt crust. Very good, and HUGE, for only $4. Delicious!
I'm off to do homework before going to Brooklyn to climb. :)
Posted by climbinvegan at 10:38 AM No comments:

So many things to talk about in this post. First things first, I'm almost at my veganniversary of FOUR years! I remember the date of my starting point as September 21 2007, so on Wednesday I'll have been a healthy vegan for four whole years. I'm pretty excited since it's a big deal for me, since I started when I was only 14! To celebrate my friends and I are going to go out to eat next weekend. We would on Wednesday, but I have to work at one of NYU's rock walls.

Speaking of rock walls, I now work at both of NYU's. One is a 30 second walk away from my dorm, but the wall is not very good. the other one is about a 20 minute walk, but it is a very good wall to train on. I only work at the better wall on Wednesdays, and the other wall Thursdays and Fridays. I'm content with my job, and happy that I got one.

I've been sick for the past week, and although it's been a huge bummer, I think I'm getting over it. To celebrate that, I baked challah today. Vegan, whole wheat, oil free challah! I made one loaf cinnamon sugar, and the other one chocolate chip. 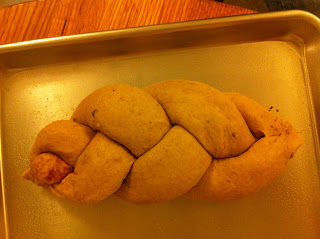 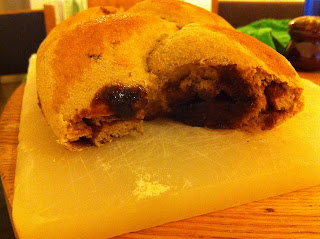 Method:
-pour yeast into water, and let stand for 10 minutes. You can frisk with a fork if it isn't mixing
-add truvia, and banana to water and stir.
-mix in flour, one cup at a time until dough forms. You may need more than 3 cups, so add as much as it takes.
-Remove dough from bowl and knead on floured surface for 10 minutes
-Once dough is not sticky, and has been mixed, place in oiled bowl, cover with a towel, and let rise for at least an hour.
-After an hour, punch the air out and continue to make challah as you choose.
-Once your challah is braided, place on baking pan, and bake at 350 F for half an hour or more, depending on size. 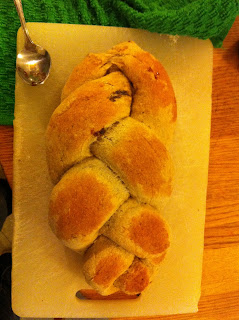 Cinnamon challah:
-mix 1/2 cup dark brown sugar with 2 tsp cinnamon
-roll out three separate rectangles, and pour 1/3 of the sugar/cinnamon mixture into each
-roll the edges of the rectangles up so that you have one long piece to braid, sort of like a cinnamon roll, and pinch all ends so the mix won't spill out.
-braid pieces together and pinch both ends
-bake for 30 minutes 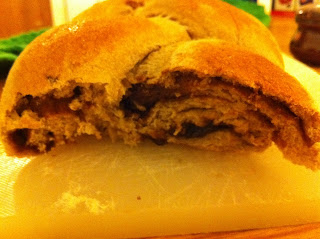 Chocolate chip challah:
-roll out three rectangles as described before, place as many chocolate chips you would like inside, and fold edges up. 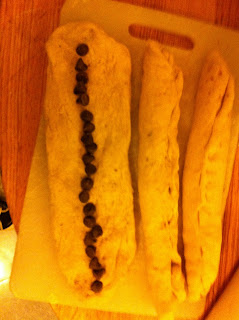 -braid and bake for 30 minutes

Hope everyone has a good weekend! I'm getting over my sickness finally, so tomorrow hopefully I'll feel well enough to visit Brooklyn Boulders and get some serious training in. I'm off to eat some more challah (which is so much better when it's nice and hot and gooey!)
Posted by climbinvegan at 3:52 PM No comments:

Day 12 here in New York City. It's been very busy getting used to life here, and starting classes. I think I've walked more in the past 12 days than I have in an entire year at home though. It's incredible- but awesome! My floor is about 23 people, and we are all pretty close. It's an interesting dynamic, but it's good to know everyone walking around your hallways.

Last night we all had a night in since we went out Friday night. In honor of the floor's movie night, I made oat bars inspired from this blog, but changed up the recipe a bit to accommodate a 20+ floor. This recipe is for the chocolate version, but the pictures correlate to the cinnamon mix. For that, just subtract the chocolate from the mix. 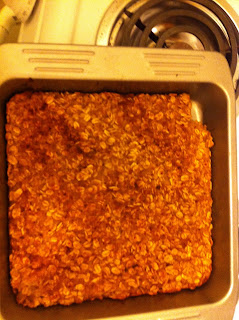 Method:
-Preheat oven to 375 F and spray baking pan
-mix all ingredients together and spread into pan
-bake for 20 minutes, then broil for 3
-let cool slightly before removing from pan
-spread with glaze if desired too 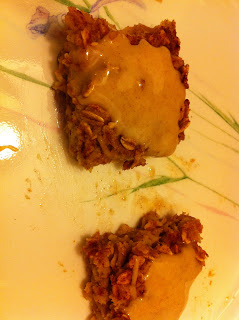 Pretty simple, and pretty healthy. The oats cook really nicely, and have a chewy consistency. The glaze is simply powdered sugar, cocoa powder, and almond milk. Mix until your desired consistency!

I'm off to do homework- till next time!
Posted by climbinvegan at 5:17 PM No comments:

it's pretty awesome here.. especially since I have a beautiful kitchen. We cooked for the first time last night, but I didn't get any pictures. I made myself and a few floor-mates my orange tofu (recipe following), and mushroom stir fry. Tonight we're having a floor dinner, but I'm just making food for myself.

Here's a few pictures of New York so far 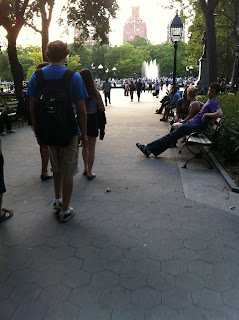 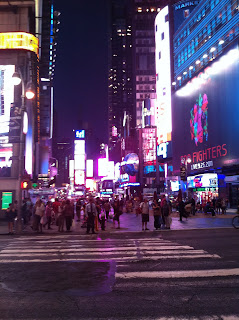 Times Square as a non-tourist! 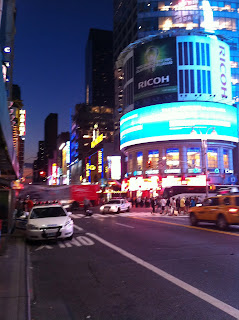 I start school Tuesday, but tomorrow I'm going up to Columbia to meet up with my friend.

method:
-press tofu until most of the liquid comes out
-heat pan and put olive oil in it
-mix orange juice and soyakki
-cut tofu into any sort of slice you'd like
-put single layers of tofu down on pan, brown for about 3 minutes on each side, then turn over
-when tofu is crispy, pour orange juice mix over tofu
-heat orange mix and tofu until orange juice is almost glaze-like, and covering tofu
-serve hot and enjoy!

my floor-mates enjoyed them, although two of them had never had tofu! it was awesome!

Posted by climbinvegan at 3:12 PM No comments: